Face, Heel, or Tweener: They're faces, but they're not not above cheating or insulting.
Style of Wrestling: Alex - Technical/High flyer Chris - High flyer
Gimmick: Little shits, but deep done they're good guys. 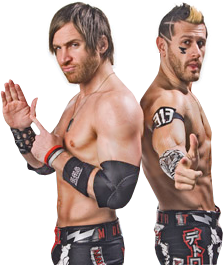 Introduction Promo: The camera fades in on a small room, standing right in the middle is the well known tag team the Motorcity Machine Guns. Alex Shelley and Chris Sabin, both have grins on their faces and the ROH tag titles on their shoulders.

Chris: Well Alex once again the Motorcity Machine Guns are at a new company.

Alex: A new company and a new tag division, the perfect place for us to once again prove why we've been the best for years now.

Alex: And now we'll be part of the the NCWA, right Chris?

Chris: Right, so the other tag teams better be ready.

Alex: We're here to win and it won't be long until we're champions.

The camera then cuts out, ending the promo.

Re: The Motorcity Machine Guns - Alex Shelley and Chris Sabin