NCWA Win-Draw-Loss Record: Starts at 0-0-0. First column gets updated when you win, second for draws, third for losses.
Current NCWA Feud: Updates each time your character is in a feud. 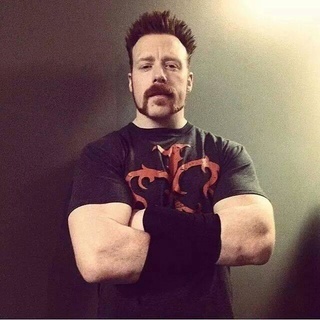 Entrance: Dropkick Murphy's 'Loyal to no one' is his theme, but otherwise his entrance is much like his WWE one.

On the titantron, footage appears. It's from a WWE show, specifically Wade Barrett's last, where he is hit by a Brogue Kick. It plays over a second time, in slow motion.
Wade stops, his eyes on the titantron. He looks helpless for a moment and then furious, getting out of the ring and screaming at the ring tech.

While Wade is distracted, Sheamus himself jumps over the ringside barrier in street-clothes. He charges at Wade, aiming to hit him with another Brogue Kick.
Wade turns, fury in his eyes and the kick connecting with his face. He goes down to the cold floor outside of the ring.

Sheamus smirks as Wade goes down before crouching beside him.

Sheamus: *repeating Wade's own words* 'mention Sheamus ever again, I will hurt you...' *he shakes his head at him* You leave 'em all outta this. You take your anger at me out on ME, leave the others out of it!

The camera fades to black on the image of Sheamus standing over Wade Barrett.
***
A new scene is shown, of Sheamus in his street clothes and a hat. He is sitting in what looks like a room backstage, watching that scene on a television. As it fades out, Sheamus lets out a loud laugh.

Sheamus: He sure didn't see that one comin' did he now?! *he laughs again* That fella deserved it though, didn't he? I don't approve of him, or anyone really, taking out anger caused by something - or someone - on another person. Sure, yeh can vent to someone else, but don't lash out at someone who didn't cause you the pain. You want help? Well, lashin' out is going to put off everyone from helpin' yeh, isn't it?

He crosses his arms.

Sheamus: I wasn't originally planning on showin' up in the NCWA fer a while yet, but seein' what that oaf has been doing made me change my mind. *he pauses for a moment and shrugs* Sure, I coulda left it to Mr Hero Rhodes to sort out, but he's busy with others. And besides; I'm partly responsible fer the mess that is Barrett, so it's my responsibility to try to fix it...

The scene fades out, with Dropkick Murphy's 'Loyal to No One' playing.

Welcome to the NCWA, Sheamus! You will be on the Salvation brand!