NCWA Accomplishments: To fill out when you win a title or major match.
Non-NWCA Accomplishments: WWE Cruiserweight champion
NCWA Win-Draw-Loss Record: Starts at 0-0-0. First column gets updated when you win, second for draws, third for losses.
Current NCWA Feud: Updates each time your character is in a feud.

Face, Heel, or Tweener:  Tweener
Style of Wrestling: Technical, occasionally with High Flying moves
Gimmick: Himself, a bit of a show off at times, but still has past issues he isn't entirely over.


Finisher: Letterbomb (Jumping DDT) Carpe Diem (Moonsault, eventually a Corkscrew Moonsault), Welcome to Paradise (Frog Splash)
Appearance: When wrestling, his outfit is very similar to his manager suit. It is the same, flashy rainbow colours, but on wrestling pants and a jacket similar to Brian Kendrick's. 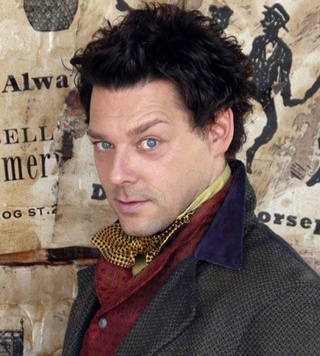 Entrance: Green Day's 'Know your enemy'. He walks out onto the stage, where he performs his spin and pose he does when managing Seth. He then pulls at his jacket in a smug fashion, making sure it's sitting right before high-fiving fans on the way to the ring. He pauses briefly at the end of the ramp before sliding under the ropes to enter the ring, where he poses in the center before removing his jacket.

The scene fades in to show two people seated in armchairs opposite each other, a small table in between them. On the left, is Egan Archer in one of his colourful suits. On the right, Casey in a shirt and vest, with dark jeans. Casey is all smiles, however, Egan appears nervous and is fidgeting with a suit sleeve.

Casey: I hear you have some good news mate, is that right?

Realising they are filming, he stops fidgeting and sits up straight. He then clears his throat.

Casey glances at the camera for a moment before looking back at Egan.

Casey: Of course, I already know the news, but for the sake of like, everyone else in the world besides ...3 of us... how about you share it? *he gestures to the camera with a smile*

Egan nods, brushing a hand through his hair before turning to the camera to address those viewing.

Egan: Right, it does help to share, doesn't it? *he smiles* After an extended absence, followed by a few years of - er - various forms of training; I am pleased to announce my official return to the ring. As a competitor in the NCWA.[/colinto]

His smile widens to a grin. Casey clasps his hands together, looking as if he wants to jump for joy, even though he'd already heard the news.

Casey: It's been a while since you've been in the ring, right?

Egan lets out a deep sigh, running a hand over his face.

Egan: It's been...it's been, like 10 years? I was in the Cruiserweight division along with Helms, Mysterio, Chavo... *he trails off and looks away with a shrug* Then we had the GM Vickie storyline and she took the belt away. I was set to go Tag after that until er- Well everyone knows what happened now, surely?

Casey nods and offers an apologetic smile, knowing he'd rather not keep on the topic.

Casey: Well it'll be great to see you in the ring again!

Egan: *with a nod* It'll certainly be... interesting to see how my first match goes...

Casey nods again, the two still talking as the scene fades out.

Welcome to the NCWA, Egan Archer! You will be going to the Revolution brand!