Nickname: N/A
Manager: Kenny often escorts Marty Scurll and Dia Banks to the ring, no matter the show, Marty escorting Kenny to the ring. The Young Bucks will often escort Dia to the ring during Revolution, as she will escort them. 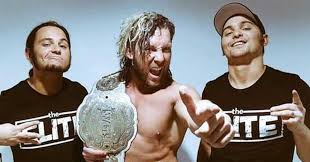 Entrance: "The Elite" by Matthew Massie
Photos of The Elite in various promotions fighting various enemies shows up in a comic book style across the ring before the lights go down. There is a moment as the song plays before Kenny Omega, Nick Jackson, and Matt Jackson are seen on the entrance ramp. During times when Kenny is not with the team, he is obviously not a part of the entrance. The trio stand on top of the entrance, mocking whoever their opponents are, before heading down to the ring.
Introduction Promo:

The camera opens up on Kenny, Nick, and Matt with the scene before us being shot on either a handheld camera or a laptop. The hotel room is quiet, the three men wearing the same shirt, a Bullet Club t-shirt, and blue jeans. Kenny is in the center, with Nick to his left and Matt to his right.

Kenny: You may be wondering who we are.

Nick: If you are, you haven’t been paying attention to anything outside of the WWE in the last….oh…four years.

Matt: We have been leading the way for those in the independent scene for far too long.

The three smirk and look at each other, before the Kenny looks at Mat to give him the go ahead to speak.

Matt: I find it silly because, like, every year now the internet starts buzzing and talking about the newest, hottest, coolest tag team coming around. “Hey look at this new tag team, they’re the best in the world” and it’s like clockwork, every single year. Six months later, maybe a year, one of the guys gets injured, maybe they split up, and then we never hear about that tag team ever again. But for…for actually fourteen years, Nick and I have been the best in the world and all these other, all these other…assholes, yeah, they come around and they do cool things for a couple of months. They have these great matches. It’s like they are a flash in the pan or something and then they just disappear. But the entire time my brother and I, Kenny and The Bucks, we’ve been standing here, we’ve been the best.

Nick: These new teams come along and they’re great and then they go bye-bye.

Matt: And then another team comes along and they’re great and they go bye-bye.

Kenny: But then…then you’ve got special cases. You’ve got the men and women who never claim to be the best but you can see…oh you can so see the beauty in them. You can see where they’re gonna be the greatest thing to come along. Look at the story of Colt Cabana and Dia Banks. Dia never claimed to be the best, she never gloated like Colt did. But being honest, she was always better. I saw that in her. I gave her a way to flourish. She joined our little club. And Marty joined our little club. Sure, I relinquished power to Dia, but I’m still proud here and I’m still willing to do whatever it takes to bring Bullet Club to the power they deserve.

Nick: He didn’t stand a chance.

Kenny: And the NCWA? Well, they don’t have a chance either.

The camera fades on the trio sitting proudly in the hotel room.